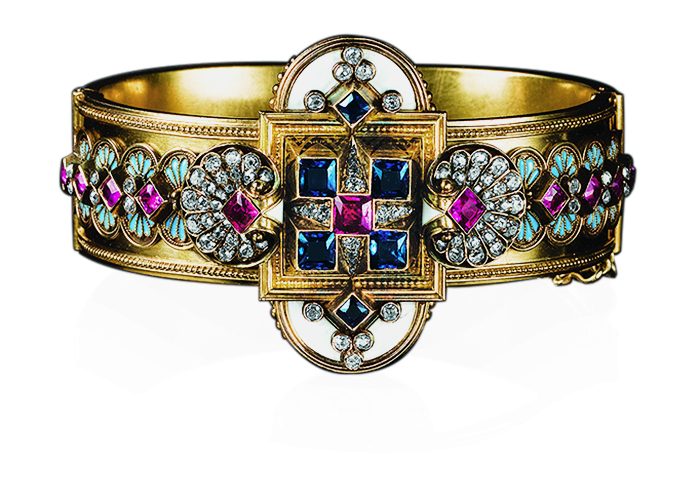 The Georgian period is named after the four successive English kings George I, George II, George III and George IV. It spans most of the 18th and part of the 19th century.

Purely handmade jewelry which predates the Industrial Revolution is called Georgian jewelry. It is very rare. Only a handful of pieces survived. Memento Mori (meaning "remember you will die") jewelery was popular at this time. This jewelry often featured coffins and skulls.

The Victorian period follows the reign of Queen Victoria in Great Britain from 1836 to 1901. Queen Victoria's love for her husband and children inspired jewelry that reflected a romantic and sentimental outlook.

Flowers, hearts, bows and birds inspired beautiful pieces of jewelry which showed the craftsmanship of the Victorian age. Serpent motifs were also popular. Gemstones were often used during the Victorian period and helped keep jewelry affordable for the mass market. Garnets, amethysts, corals, turquoise, and seed pearls were in style.

Opals were increasingly popular as Queen Victoria adored them. Diamonds were discovered in South Africa in 1867 and became popular during this period as well. Human hair was also incorporated in jewelry during the Victorian Period. This jewelry was given as a token of love and also worn as mourning jewelry.

It is usually divided into three periods:

Similar to the Georgian era, early Victorian jewelry features nature-inspired designs which were delicately & intricately etched into gold. Lockets & brooches were popular. Colored gemstones and diamonds were mostly worn in the evenings.

This era corresponds with the death of Queen Victoria’s husband which inspired more solemn, grave designs known as mourning jewelry. The pieces feature heavy, dark stones like a jet, onyx, amethyst, and garnet.

During the Late Victorian or Aesthetic period, jewelers used diamonds and feminine, bright gemstones such as sapphire, peridot, and spinel. Star and crescent designs, as well as elaborate hat pins, were very common.

This style was popular from roughly 1895 until World War I. Art Nouveau was an exploration into the world of nature and fantasy. Art Nouveau pieces are characterized by curves and naturalistic designs, especially depicting long-haired, sensual women.

Wounded by trauma of WW I Germans called this period Jugendstil or Youth style.

In 1901 Queen Victoria passed away and her son Edward VII became the King of England (1901-1910). This period refers to his reign; hence, the term Edwardian. It is also know as Belle Époque and is characterized by geometrically shaped jewelry.

In the early 1900's Louis Cartier successfully claimed that he created jewelry out of platinum. He excelled in his garland style masterpieces, done to enhance the brilliance of diamonds. Edward VII named him first in the long list of self promoting jewelers and designers, "the jeweler to the kings and the king of jewelers."

Art Deco is the geometric style that succeeded Edwardian jewelry beginning in the mid-1910's, and reaching full bloom in the mid- 1920's. This style originated in Paris, France and was characterized by geometric lines and angles, rather than the curves of the previous era.

Colored stones were utilized more, and opaque stones such as jade, onyx and coral were set in geometric shapes. Sleek animals such as Cartier's panthers and falcon's were popular in some designs. The style started out with relatively delicate designs, transitioning from the Edwardian period, with more geometric and angular patterns. It eventually evolved into bolder Art Moderne. In the Art Deco period, many stones were cut in strict, geometrical shapes, typified by the calibre technique or extensive use of elongated baguettes, square Carré, French cuts, and Single cuts.

The Retro jewelry period began in the 1930's during the Great Depression and was finally put to rest in1950's. Jewelry during the Retro period is characterized by bulky crude unrefined shapes and forms, that showcased large colorful gemstones in over sized, often rectangular cuts.

Synthetic rubies and sapphires were popular along with semi-precious gems. Gold became the metal of choice because platinum was not available to the jewelry industry during World War II. Designers were churning multi-colored gold jewelry into bizarre combinations of rose, yellow and green.

This was truly a horrible time for jewelry and remnants of Retro aesthetics are still haunting us today.