The luminescent, neon-blue tourmalines were originally discovered in the Brazilian state of Paraiba and were named after it. Decades later, a gemstone from the same family was discovered in Nigeria and Mozambique, in Africa. Unusual, isn’t it? That’s because these copper and manganese colored gem deposits were separated millennia ago by a continental drift.

Paraiba gems first appeared on the market at the beginning of the 1980s creating quite a stir with their stunningly electric appearance. Within a short span of time, they were valued as high as the most exclusive and expensive gemstones such as Burmese rubies, Colombian emeralds, and Kashmir sapphires.

Leon Mege’s award-winning collection of jewelry with natural Paraiba tourmalines is one that’s highly regarded by industry experts, fashion critics, editors, curators, and bloggers as being unique works of art. In 2015, Leon Mege was honored with the most prestigious jewelry award - the AGTA “Best Of The Show” for his Paraiba cab-and-French-cut diamond ring, which you can view here. 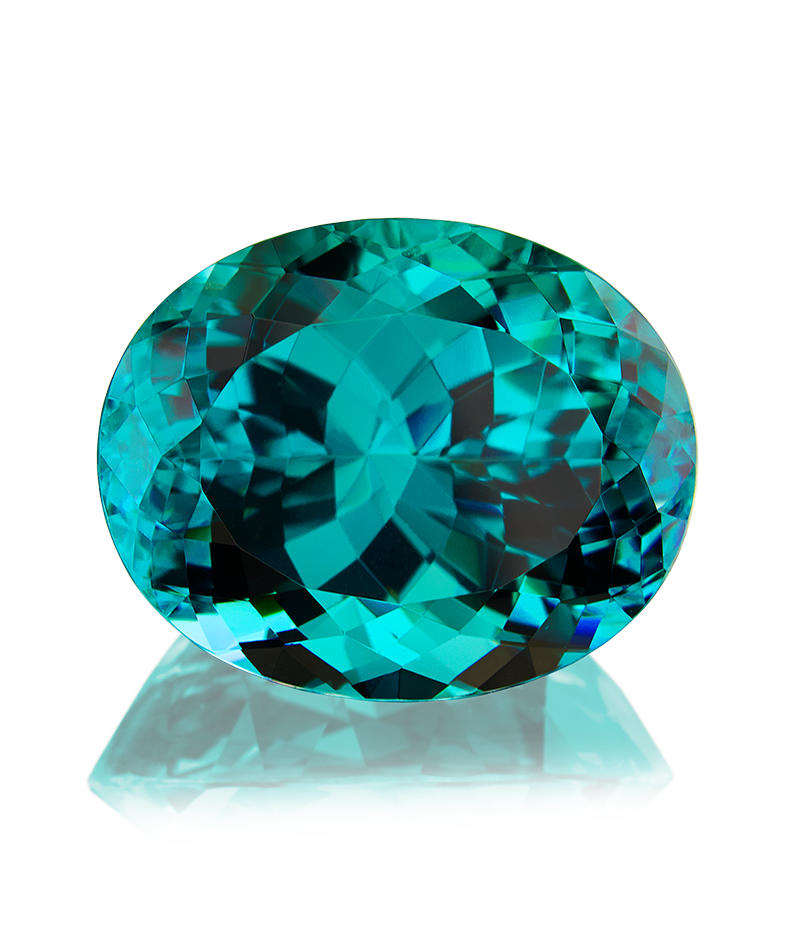 Paraiba tourmalines are most valued for their Brazilian origin. The copper-bearing tourmaline from Africa is less expensive, albeit virtually indistinguishable and equally beautiful. The great disparity between the value is due to the material’s availability, or the lack thereof.

That itself presents a great buying opportunity. Since there is no other place in the world where similar stones exist, buying the African Paraiba tourmalines definitely makes for a smart investment.

If you’re concerned about its appearance in comparison to the Paraiba tourmalines from Brazil, we must tell you that unless you’re a professional jeweler, it is almost impossible to distinguish them because of the similarity in their chemical composition. If you aren’t convinced, the most respectable gemological laboratories such as Gubelin or AGL will be able to issue an opinion based on a collection of observations and analytical data.

The best samples from Nigeria or Mozambique show colors that are as vivid and saturated as stones from Brazil. In 2006, at the International Gemstone Industry Laboratory Conference, the term “paraiba tourmaline” was legally adopted as the name of the variety of the mineral known as cuprian elbaite, regardless of its geographic origin. Today, the copper and manganese-bearing tourmaline may come from several localities, but are legally allowed be referred as “Paraiba Tourmaline”.

What makes Paraiba tourmalines so unique? 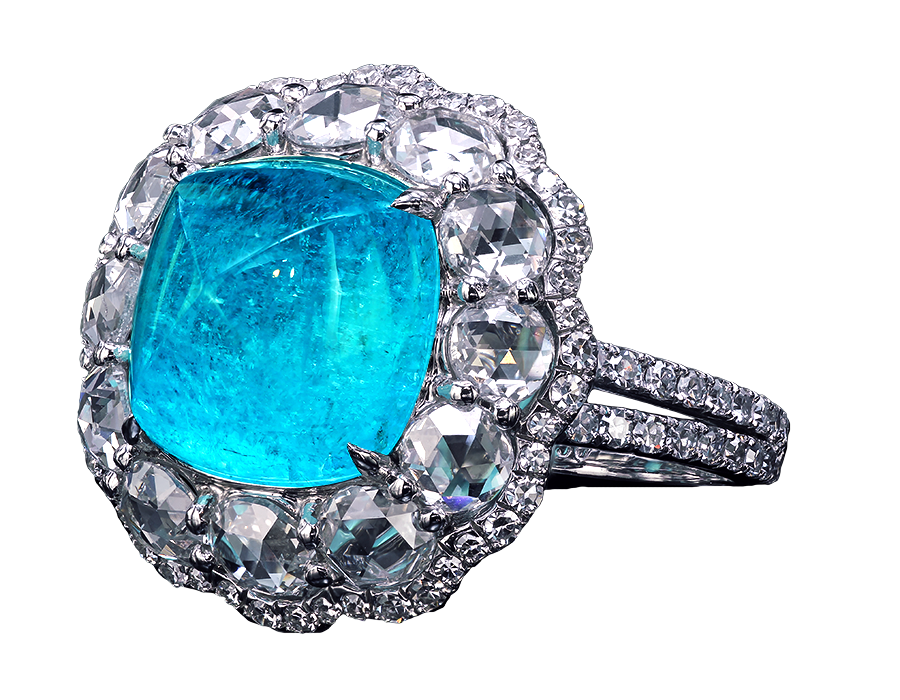 Its limited availability. The supply of gem-quality Paraiba tourmalines is finite, making them precious crystals with astronomical prices giving even the finest colored diamonds a tough competition.

There are so few Paraibas in the world that only a single Paraiba is found for every 10,000 diamonds, making Brazilian Paraiba tourmalines so scarce that they are literally hunted down by collectors and jewelry lovers.

The presence of copper in Paraiba tourmalines is what gives the gem it’s ethereal, radiant blue hue. To be called “Paraiba,” a stone must have some copper content. A spectroscope analysis can detect a general absorption starting at 600 nm. This marker is only present in copper-bearing tourmalines.

Paraiba Tourmaline looks exceptionally well in bright light as well as in spaces with dim or poor lighting. Just like other tourmalines, Paraibas have 7-7.5 hardness making them well suited for jewelry wear. The issue is not their sturdiness, but their expensive prices.

Paraibas should be handled with respect due to their exclusivity, high cost and their unbelievable magnificence. Paraiba tourmalines have the same sturdiness as any other tourmaline variety, so wearing Paraiba on your finger will eventually result in slight-to-moderate abrasion and minor chipping that could be polished off with some loss of weight. Due to that, the faceted stones, especially those of exceptional quality are recommended for occasional wear or set into pendants, necklaces, and earrings - in other words, pieces where precious Paraiba is relatively safe from hard knocks a ring would sustain. 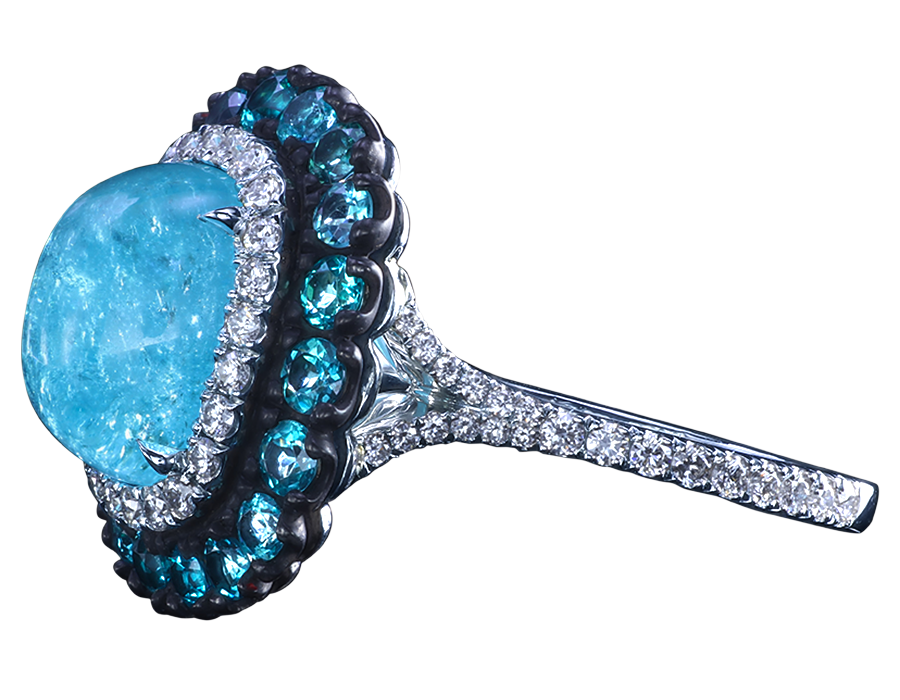 Who knows what awful things people do with their hands, but the signs of damage is often a testament to the daily abuse the ring has suffered. Cabs are much more practical when it comes to casual wear and are recommended for rings. Many translucent Paraiba cabs have natural inclusions of copper that have a shimmering effect when the light hits them, resembling “aventurescence”, gemstone phenomena.

The glistening Paraiba cabs are extremely beautiful and lend themselves well to various unorthodox jewelry designs. Setting a Paraiba tourmaline into dark metals such as antiqued white gold or silver helps to accentuate its color. Paraiba could be combined with green, yellow, purple gemstones and, of course, looks stunning with white diamonds.

Only the most experienced jewelers and setters should be allowed to touch the gem that routinely commands prices exceeding $100,000 per carat. Here is the look at Leon Mege’s work with Paraibas over the years.

Leon Mege’s concept of “Affordable Couture” can help you become the proud owner of an exquisite gem that is not going to break your budget. We have many loose Paraiba tourmaline stones, both faceted and cabochons, to be mounted into handmade pieces that are uniquely yours.

Heat treatment is a very common type of color enhancement in gemstones, used not only on Paraibas, but other varieties of tourmaline, rubellite, as well as corundum rubies, sapphires, tanzanites, beryls, zircons, and others. The heating is done using special equipment which gradually increases the temperature to about 500-700F over hours and sometimes, even days.

Regular, high heat treatment leaves identification marks in the gemstone crystal structure, while low heat does not. Because of that, gemological labs are not certifying any type of heat treatment in Paraiba tourmaline. The general assumption is that all Paraibas are heat treated, although, in theory, the heating could be naturally occurring.

The Paraiba tourmalines are cut in a way that maximizes the weight and preserves the stone’s volume. It means that you should not expect perfect symmetry and ideal proportions from Paraiba. The stone’s color and transparency are the two most valuable properties and that’s what you should focus on.

What does the Internet say about Paraiba tourmalines? 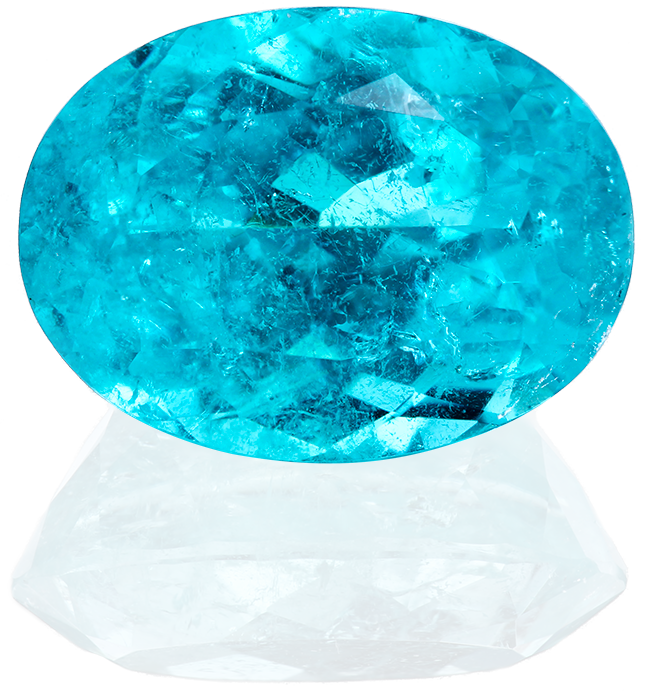 Paraiba tourmaline electrifying color gave birth to claims of its supernatural abilities to protect its owner against negative mental, spiritual, emotional, and even physical forces.

Researchers at Leon Mege Paranormal Institute of Gemology (PIG) in Princeton TX recently discovered that wearing Paraiba will protect against a political opponent election.
It’s an open secret that Bernie Sanders famously refused to wear a Paraiba-set ring in the last election, claiming it does not work with his skin tone. We all know what happened next.

Our PIG scientists are conducting additional experiments to learn whether Leon Mege mounting can intensify the “electorance” effect in Paraiba Tourmaline. This email address is being protected from spambots. You need JavaScript enabled to view it. if you want to volunteer for the studies.