Matched pairs of stones are used to accent a center stone in a three/five stone ring. They are also used in earrings, usually as links in drop earrings.

How well they are matched to each other is one of the most important characteristics side stones are judged by.

Some side stones are commonly set north to south (in line with the finger), and there are some that are set east to west (across the finger). Some could be set either way.

Almost every shape can be faceted as either a step or a brilliant cut.

Bullet diamonds are usually baguettes with one narrow end cut into a V-shape.

Bullets are usually set with a V-shaped wall on the pointy side and prongs on the other end. In fine jewelry, they tend to be set directly... 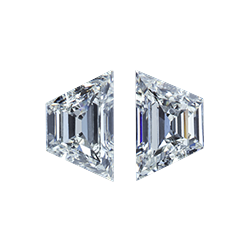 Trapezoids or "traps" are modified straight baguettes that are tapered on both ends to form a trapeze... 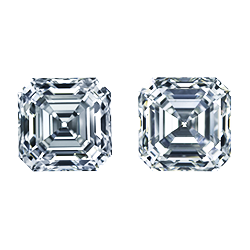 The emerald cut side stones step in when straight baguettes are not important enough to be on the side of an Asscher or emerald cut. 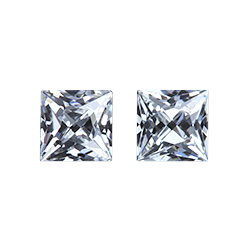 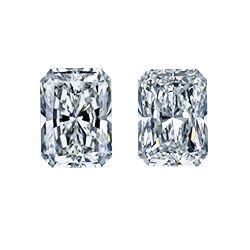 Radiant diamonds will usually pair well with other radiant stones. Princess cut or modern cushions could be used with radiant sides. 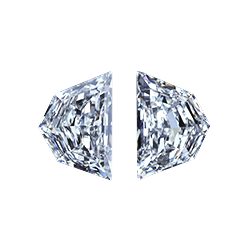 Chevrons are similar to trapezoids, but they have five sides and a pointy back facing the shank.
Sometimes they are called "Cadi" - because their outline is reminiscent of the famous Cadillac logo. 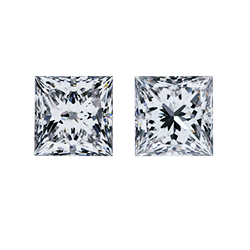 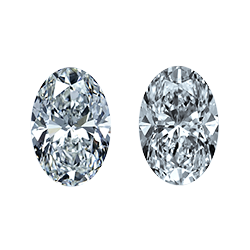 Rarely used as side stones, they could be seen in rings with a matching stone in the center. For example, a large oval stone might have two smaller ovals on each side or a large marquise might have two marquises.

Ninety-nine percent of the time they are aligned with the center. Older jewelry commonly used bezel set marquises on the top portion of the shank.

Today, it's rarely done in fine jewelry, but prong-set marquises are a common fixtures in cheap "designer rings." 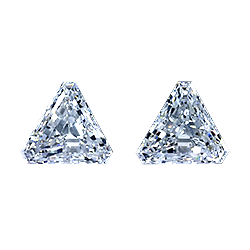 It is easy to see how closely they are related to shields, with just one exception: they do not end in a point.

Step cut shields might be pretty but they are difficult to blend into a shank. Brilliant cut calf's heads look more like trillions with broken tips. 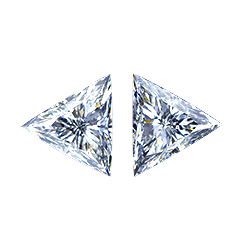 Used as a generic term to describe a triangular cut diamond, Trillain is actually a brand name. There are others, Trielle is another patented cut that has completely straight sides.

Produced from "mackle" rough, that is difficult to cut into any other shape, triangular diamonds were produced under different brand names.

Used mostly in the 80's, trillions were very popular, but now they look outdated and unsophisticated.

Their short lived popularity is due to the novelty factor that fizzled out long time ago.

Baguettes are the most common side stones used in engagement rings. 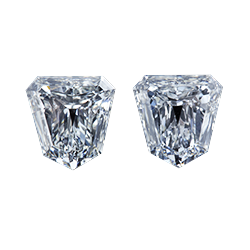 Shields are beautiful whether they are step or brilliant cut.
They are great transitional stones that could be paired with virtually any center stone. 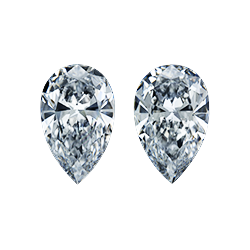 The pear shaped stone could be a center stone in its own right, or it could be a supporting actor in a brilliant play.

Pears are breathtakingly elegant when they are flanking a round stone.

A round stone with two pear shapes is one of the most elegant combinations of stones in a three stone ring category. 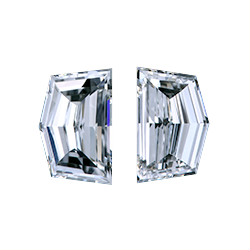 Epaulettes or Cadillacs (Cadi’s) side stones are similar in shape to Chevrons but they are generally shorter and less angled.

Perfect for those who have small finger size. 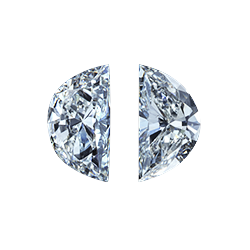 Half-moon diamonds look like a round or an oval diamond sliced in half. 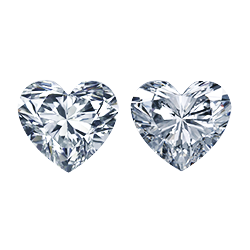 Heart shaped stones are a poor match in a three stone ring. They fare better next to a rounded stone (oval, marquise, round), or a cabochon.

This is the only shape that could transform a pearl into a viable center stone for a three stone ring. 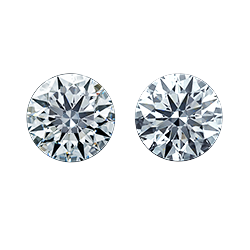 A round diamond is the king of a three stone ring - it usually presides over the center of the ring. In the role of side stones, round diamonds are screaming for attention, and this is not good.

The general result is the "Mickey Mouse" effect that undermines their beauty. The only stone to tame their insatiable appetite for fame is the Big Brother - a round stone that is big and strong enough to put these cheeky buggers into submission.

Other than that, you might have a better effect by setting your stone in the middle of a pair of binoculars.

Caesar cut is a relatively obscure mixed diamond cut with a cushion outline of the girdle, brilliant faceting on the crown and step-cut pavilion.

Because of this "dual-personality," the Caesar cut can be matched with both step- and brilliant-cut center stones with excellent results.... 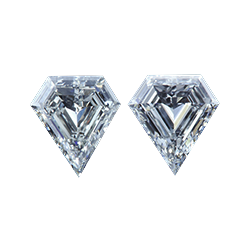 Kites could be step cuts. However, brilliant cut kite stones are a much more common variety.

Some people believe that they are a viable substitute for a shield or a bullet, but the truth should be told: they share the last place in the diamond side stones hall of fame (along with the trillions to whom they are closely related). 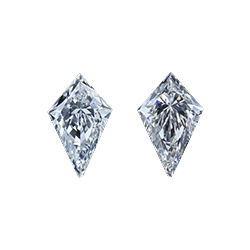