There is no such thing as “free lunch”

New York is the center of the Universe. It’s also the capital of the diamond world. The area within a one-block radius of 47th Street in New York’s Diamond District holds a vast amount of wealth in diamonds and precious stones.

The concentration of the world’s diamonds sitting in the vaults of the New York Diamond District is so immense that it could easily be enough to purchase a country. Strike that - a continent. 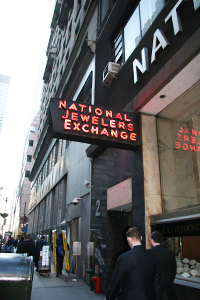 Hundreds of international and domestic companies operate here. They loan stones on memo for examination, testing, and sale to members of the trade in good standing. The number and value of the stones a company could borrow depend on its reputation and credit rating.

With so many suppliers and stone’s availability in New York, there is no compelling reason to look for stones located elsewhere.

In the past decade, India has become a major source of diamonds due to the protectionist policies of the Indian government. The vast majority of the stones located overseas are owned by Indian companies.

Those stones are listed on the wholesale market, and the listings are piped through the web interface to a multitude of search engines found online.

The great majority of Indian dealers and cutters are outstanding members of the trade, but unfortunately, it has become increasingly troublesome and risky to source stones from India.

Since the stones cannot be easily examined in person, a consumer has to rely on electronic communications that are prone to hacking. All images, certificates, videos, and scans provided by the seller could be easily forged, tweaked, or manipulated, and they cannot be immediately verified.

There are many ways you can experience a loss while sourcing stone from overseas.

The letters B and G stand for Brown and Green - attributes not mentioned on any certificate, but negatively affecting the stone’s appearance and, therefore, its value.

A diamond’s color grade refers to the amount of color in the material but not its shade (unless there is so much of it that the stone is graded to have a fancy color and becomes much more valuable). Within a regular color range (D-Z) a stone might have a brown or green tint.

The green and brown tints are very undesirable and should be avoided. The problem is, the tints cannot be detected unless a stone is examined by an expert diamond grader under uniform lighting.

The letter M stands for Milky 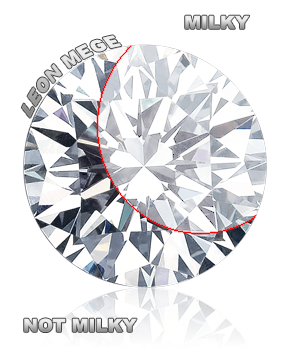 Due to some factors such as the orientation of the inclusion clouds, graining, and fluorescence, a stone can look foggy or cloudy.

There is a very slim chance for a consumer to find out whether the stone is BGM or not. The risk of losing their reputation would prevent US-based dealers to sell such a stone without disclosure, but dealers overseas are notorious for misrepresenting their stones.“Comparing my stone to a competitor in India?” one prominent New York cutter told me recently. “You know the stone is a brownee, don’t you?”This sentiment is echoed by many New York dealers we spoke with.

While attempting to print a GIA certificate would be suicidal in the US, where the strength of laws and regulations would prevent such a scam, there are unconfirmed reports of counterfeit certificates popping up in India.
All new GIA certificates have security features such as holograms, security screens, and microscopic prints that protect them from forgery or duplication. Forged certificates from labs other than GIA that do not have their databases available for instant verification might be much more difficult to detect.

India is the only country with an existing market for unused GIA grading reports. A diamond report is worthless without the diamond it was issued for. Not in India. It’s worth a whopping $50 there (a huge amount of money for a third world country). There are cutting shops specializing in cutting diamonds to match those certificates in measurements and weight, but with significantly lower color and/or clarity (attributes not easily noticeable by a non-professional).

The Asian Institute of Gemological Sciences (AIGS) recently issued a warning over fake gemstone reports bearing its logo. The counterfeit reports contain a working QR code that directs users to a fake website with the suffix .co, rather than .com.

A New Delhi based firm was caught selling CVD lab-grown diamonds with natural diamond grading reports. In another development, The International Trading Corporation of New Delhi, a supplier of synthetics, advertised CVD (synthetic) diamonds with a fake GIA diamond report stating that the stone is natural (not man-made).

The synthetic's fraud is widespread, for example, in November of 2017 a forged laser inscription on a synthetic diamond that implies that the stone is certified to be natural was discovered, clearly, it's just a tip of an iceberg.

In April 2018 a grading laboratory in China received a 3.10 carat F-G/VS synthetic diamond, complete with a forged inscription and a falsified report stating that the diamond is natural.
When the number inscribed on the girdle was matched with the online database, it turned out that the original report was for a natural H-color, VS1-clarity natural diamond. The inscription and accompanying paper report were fakes.

Recently, GIA invalidated grading reports for 1,042 diamonds submitted primarily to its India grading laboratory after someone gained access to its database and altered the grading reports.

The Diamond Trading Network has suspended 10 Indian companies for allegedly participating in a scheme that hacked into GIA’s computer system.

When you send thousands of dollars to a third world country there is always a danger of your money being stolen.
Obviously we always check references before wiring your money, but, at stakes being so high, there is always an inherent risk of a loss due to company transgression, or employees acting on behalf of the company.

Let’s say you get lucky. The stone is a genuine diamond with a genuine certificate, and it is sold by a very reputable dealer who you feel pretty secure wiring the money to knowing that you will get back the exact stone you purchased and can trust the seller’s assurance that the stone is not BMG.

What’s next? For starters, it takes at least several days for the stone to arrive. But what if you look at the stone and don’t like it? Can you return it? Sometimes you can, sometimes you can’t. Even if the return is allowed, restocking fees are charged. 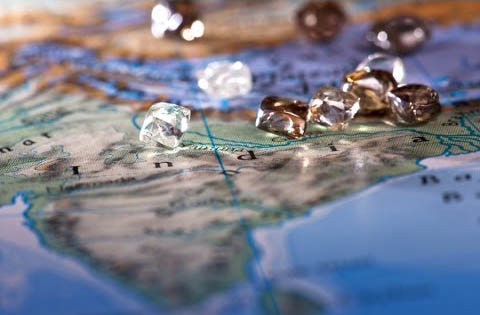 When you order stones from India you have to pay the full amount upfront. They don’t loan stones on a memo, as dealers in New York do. So you have to wait for the stone to make the trip home, which is at least another week.

The stone has to be checked and your refund processed. You know how you get an instant refund in the US, sometimes even before you actually return the item? In India the process is… m-m-m ... slower, sometimes much slower. When the money is finally sent back, mysteriously it takes several days to arrive (as opposed to just an hour when done by us)

The result? You just lost a few hundreds of dollars on return shipping and occasional restocking fees. You lost almost a month out of your schedule (unless you have spare money to buy a stone while waiting for a refund - but most people cannot afford such a luxury)

You also took a tremendous risk in order to save a point or two compared to an identical but verified stone located right here in New York.

There is a high degree of fraud in India due to lax oversight by the government and law enforcement.

So many payments to overseas suppliers are stolen that warnings advising to be careful are sent frequently through the trading network.

The typical scam works like this: A buying request is intercepted by a hacker who has gained access to a seller’s email system. From that point on, the hacker impersonates the seller, and once the deal is struck, it provides a very authentic-looking invoice with wire instructions, directing funds to his own bank account. Once the money is withdrawn, nothing can be done to recover the funds.

There is no such thing as “free lunch”

The stone with the lowest price in the category is always the one located overseas.

Most diamonds are priced as a commodity where the market determines and regulates the price. There are no bargains. You get exactly what you pay for.

People who fall for overseas stones are usually “do-it-yourselfers” who think they can outsmart the market by sorting diamond listings by price.

How to spot a stone located overseas besides its unusually attractive price? Very simple: check its availability, if the stone cannot be overnighted to you chances are that it is locked in a safe somewhere in India.

Hundreds of companies clustered around New York’s Diamond District hold the vast majority of diamonds available on the market. They could be borrowed (memo program), examined and tested. Not so with stones located overseas.

We always gave a strong preference to diamonds located in the US and specifically in New York. Due to our outstanding reputation in the Diamond Trade, we enjoy close relationships with all major diamond companies and have direct access to their inventory.

Whether you use a diamond search on Leon Mege.com or other websites you access the same database. An interface is different but the diamond listings are the same.

However, every reseller has the ability to filter certain listings. Unlike web re-sellers who indiscriminately pump every available listing to their search engines, we take it much more seriously. When you search through our listings you see only those that come from reputable US-based dealers, that we have personal working relationships.

It doesn’t mean we don’t have access to stones that are not listed in our search. If our customers require a specific stone grade that is only available overseas we are able to source the stone and sell it at a significant discount.