Color is not desirable in engagement rings - that's why engagement rings are mostly made with platinum or white gold and set with colorless diamonds. Unlike other jewelry that is worn on and off, an engagement ring is always present. No matter what situation you find yourself in - casual or formal, romantic or official, all decked out or au naturel, it is there.

A colorless stone works with any outfit, any style, in any season, in any climate. Light blue is the closest to having no color at all. Blue is a neutral color that creates a sense of calm and relaxation. That's why Facebook, Linkedin, and Twitter all have blue logos.

There other stones to consider in place of a diamond for an engagement ring:

The notion that simulants - natural or synthetic - are used to dupe people is preposterous. So-called "fake" diamonds are not masquerading as naturally mined diamonds. That is what diamond dealers want you to believe because it cuts into their profits.

More often, a simulant is a stand-in for a natural diamond that will replace it one day. But diamond dealers do not want to wait, they want to sink their grabby hands into your pocket as fast as possible.

Born of intense heat and crushing pressure hundreds of miles below the Earth's surface, natural diamonds are the crystallized stardust hidden within the womb of the Earth. Each natural diamond is a unique miracle of space & time born eons ago.

The process of diamond creation ended 3.2 billion years ago. Only recently, an artificial diamond was created by replicating the Earth's mantle's immense pressure and heat.

Are lab-grown diamonds real? Yes, they have the same chemical composition, same physical and optical properties as natural diamonds. The only difference is the origin, which only a gem lab can verify. Other than the way it was born, an artificial diamond is indistinguishable from its natural counterpart.

Producers of lab-grown diamonds add chemical markers to the stones to aid in identification. On rare occasions, unmarked synthetics from rogue producers are finding their way into the natural diamond supply chain. A GIA certificate is the best defense against swindlers.

Lab-grown prices are dropping. Why buy a natural diamond when you can have a lab-grown diamond for a fraction of the cost, and save an estimated 30% or more?

Spinel is a natural gemstone that comes in every color of the rainbow. White spinel is colorless, but light-blue or light-grey varieties are popular center stones for engagement rings. Due to its excellent hardness (8 on Mohs scale), spinel works exceptionally well as a diamond substitute. 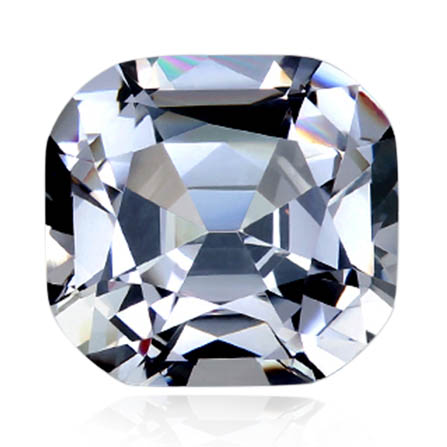 A spinel's girdle can be left exposed without worrying that it will get chipped immediately. Spinel works well in five- or three-stone engagement rings, as well as solitaires.

Precious red spinels have long been mistaken for rubies.

For example, the Black Prince's ruby that was mounted in front of the British Imperial State Crown turned out to be red spinel. Recently spinel was added as of August's second birthstone. Thanks to its array of colors ranging from red, orange, pink, purple, and lavender to black, spinel is a jewelry designer's dream.

A variety of beryl with light blue color - an aquamarine has exceptional luster and clarity. It is high on the list of diamond alternatives. The calming color of the stone is associated with a good marriage. 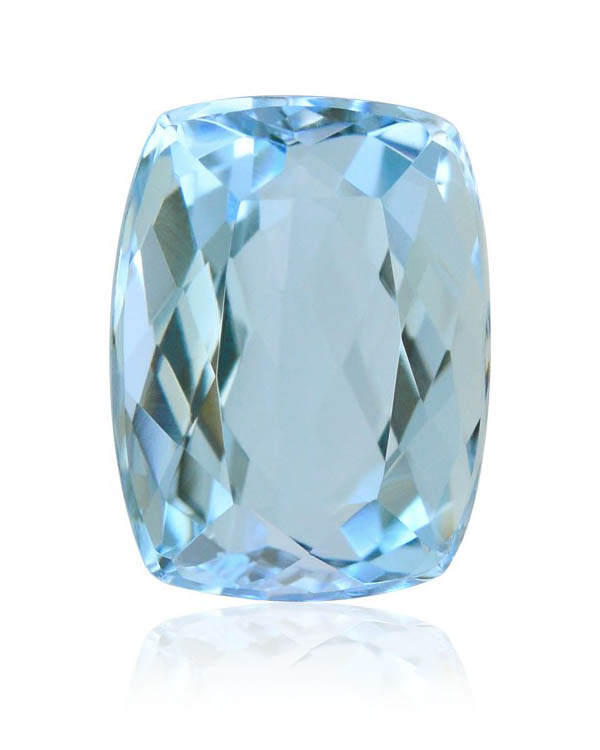 Aquamarine is a precious natural stone with a rich history predating the Roman Empire, highly prized for thousands of years. It comes in a variety of cool shades – from pale blue to deep ultramarine.

Aquamarine is typically much lighter than a sapphire, yet warmer than a spinel's cold and steely blue. Aquamarine color is very calming, subdued, similar to the tone of a fancy blue diamond. Aquamarine is a moderately priced, widely available, and well-known gemstone.

Aquamarine is an excellent choice for bridal jewelry - earrings, necklaces, crowns, etc. to be worn at the wedding.

Topaz is durable, has a lot of fire and brilliance, and is very inexpensive. It looks equally good with a brilliant-cut - such as round, oval, cushion, or as a step-cut emerald. In nature, topaz comes in a variety of colors, such as light gray, baby blue, light brown, taupe, or pale yellow. 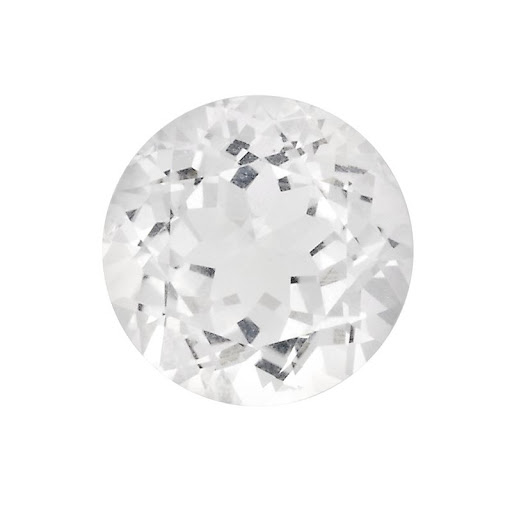 The colorless variety is usually irradiated to induce the blue color familiar to all. Deep pink or red varieties of topaz are very expensive; they are called Precious topaz or Imperial topaz.

Before gem labs populated the Earth zircon was the most common diamond impersonator. Zircon is relatively hard (7.5 on Mohs scale) and has exceptional fire due to its strong dispersion. Naturally tinted yellow-brown, zircons look exactly like low-color Brazilian diamonds that were common until South African diamonds were discovered. 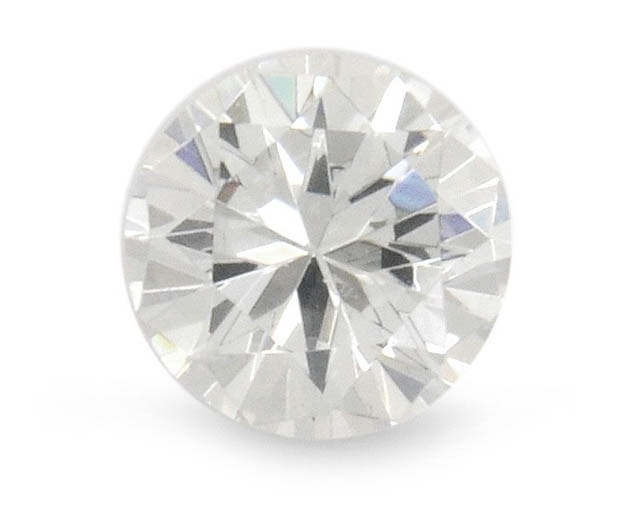 Colorless zircon is known for its brilliance and flashes of multicolored light called fire.

Con: In colorless variety - glassy, lack of brilliance and fire, in any color - expensive.

Depending on color saturation and origin, sapphires can be extremely expensive. Most people are familiar with blue sapphires, but they also can be colorless, which is the least expensive variety. Few colorless sapphires are leftas-is, they are typically heated to produce a more desirable blue color. 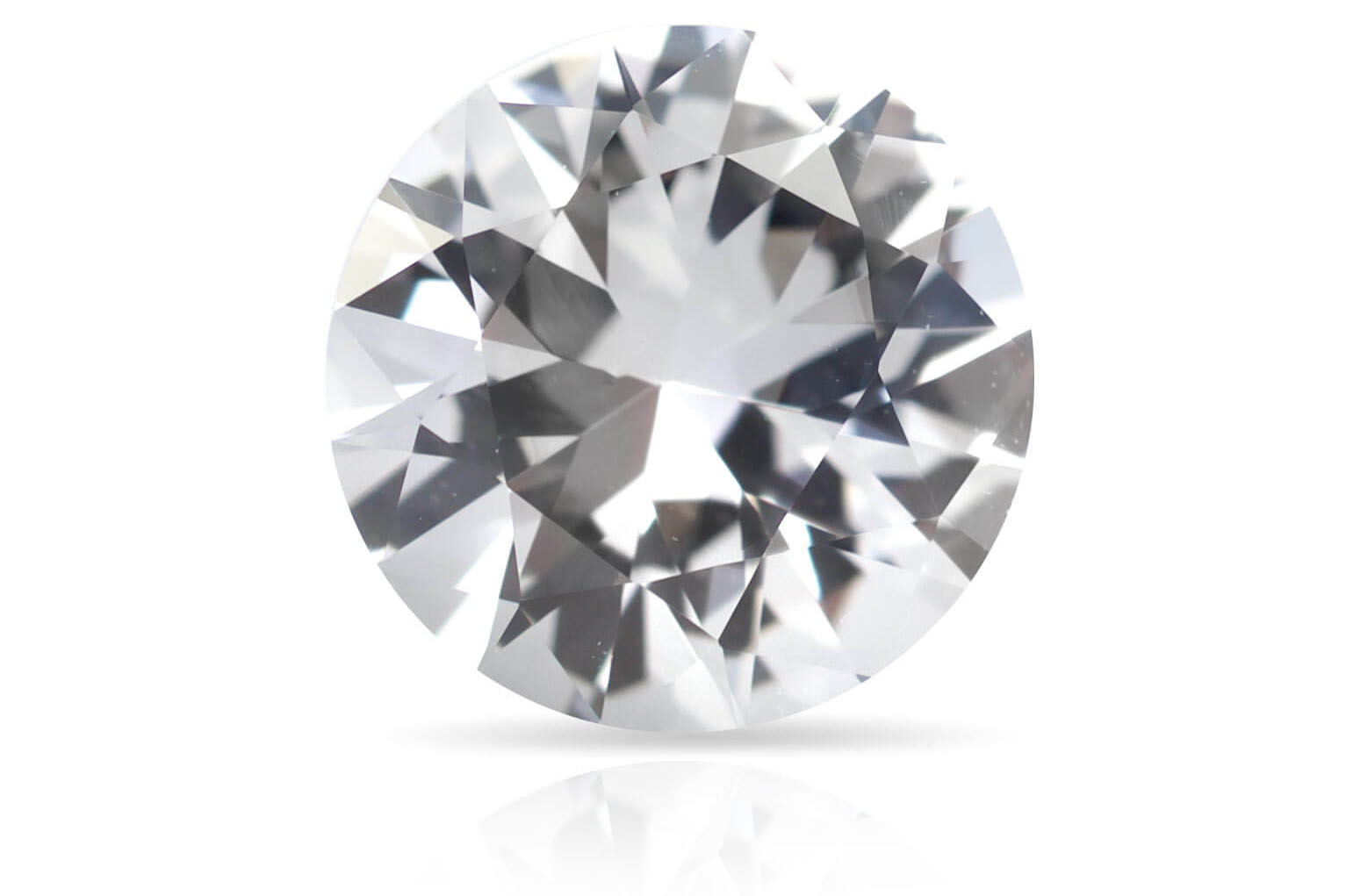 Colorless sapphires have a dull, glassy look because corundum is not good at bending light or breaking it into spectral colors because of low dispersion. A colorless sapphire's luster is inferior to the pure adamantine luster of a diamond. It appears blurry, washed out, and cannot be confused for a diamond.

Colorless sapphire is a poor choice when compared to other gemstones, either natural or synthetic. Light blue sapphires, on the other hand, are very affordable and good-looking stones. Dark blue sapphires were not common in engagement rings until Princess Diana got one from Prince Charles.

Sapphires instantly became a popular alternative to diamonds. Decades later, the sapphire ring was re-gifted to Kate Middleton, robbing jewelers of yet another lucrative sale. Spinel is a much better natural alternative to a diamond, while synthetic moissanite is cheaper and more diamond-like. 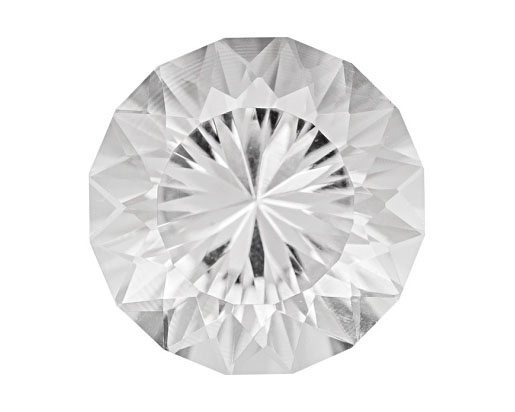 Danburite was discovered by Charles Upham Shephard in Danbury, Connecticut, and it is still mined there today. Danburite usually ranges from colorless to very light pink, but sometimes light yellow or brown. It is known for its excellent transparency and clarity. Danburite is a reasonably hard mineral measuring 7 to 7.5 on the Mohs scale.

Moissanite is lab-grown silicon carbide. In nature, small quantities of silicon carbide were found in meteorites. Moissanite was named after Nobel prize winner Henry Moissan who proved that it is a new mineral. It was not used in jewelry until 1998 when a North Carolina-based R&D lab synthesized Moissanite. 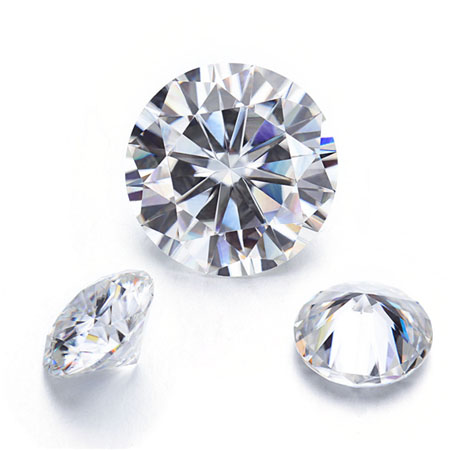 The original moissanite was not very pretty. It had a strong greenish-yellow tint on top of strong double refraction. However, after the Charles & Colvard patent expired in 2016, the old murky moissanite quickly gave way to the new, pure white material. It remains unclear whether Charles & Colvard were unable or unwilling to produce white material during the decades they held the patent.

Modern moissanite and, in particular, Leon Mege Blonde moissanite does not have yellow or green overtone, it is absolutely white. There is no grading system similar to a diamond's 4C's for moissanites; they are graded solely by color. Each moissanite vendor claims superior cut and clarity. This is a superficial claim due to the low cost of the rough material. Producing an excellent cut is easy when preserving the weight is not an object.

Leon Mege Blonde moissanite is superior to any other moissanite brands because our cutters have an overwhelmingly better experience and knowledge. Faceting silicon carbide to look like a natural diamond requires slightly different angles. This is due to the difference in the optical properties of moissanite. Collection-color Blonde moissanite is a rough equivalent of GIA D-E color in diamonds. Production grade is F-G, Commercial grade is H-I.

A common thought when considering moissanite is whether or not the gemstone will pair well with diamond accents. Moissanites look beautiful when set in rings featuring diamond accents. The image above features oval moissanite set in a diamond-accented three-stone setting. Surprise, surprise - China produces more than 80 percent of the world’s silicon carbide.

Moissanite has 9.25 hardness on the Mohs hardness scale - by far the hardest mineral except for a diamond. It has minimal cleavage, so it will not chip easily and it is very safe to use and wear.

Cubic Zirconia or CZ, the abbreviation of its chemical composition, is hardly the most romantic name for a gemstone. CZ is a hard (8.5 on the Mohs scale), single-refractive gem. It means that it does not have the "doubling effect" of moissanite.

Natural crystals of cubic zirconia were found in nature in the form of microscopic grains by two German mineralogists in 1937. In the 70s Soviet scientists working on a laser capable of obliterating the US accidentally synthesized cubic zirconia.

The production of pseudo-diamonds named "Fianit" for the Physical Institute of the Russian Academy of Science(FIAN) soon ensued. However, the Politburo, concerned with the new stone's sales cutting into the lucrative diamond trade, missed the opportunity to corner the market.

Western and Asian producers seized the opportunity, and soon generic CZs flooded the markets. Early CZs were often contaminated with undissolved flux remnants that were causing the stones to turn yellow with time. Modern CZs will not yellow or become cloudy.

CZs' high dispersion is responsible for a significant amount of "fire" - a rainbow-like color separation of the light exiting the stone. Because of it, a CZ has more fire than a diamond. But CZs' lower refractive index results in a substandard brilliance with less contrast resembling a diamond with a strong fluorescence.

However, since step-cuts have less brilliance and sparkle an emerald- or an Asscher-cut CZ looks very diamond-like. CZs' tell-tale brightness that makes it unnaturally white can be masked with a thin layer of tinted coating, similar to the coating on a pair of sunglasses. This coat is not stable and scratches off easily.

CZs go by a multitude of names born of creative marketing, some more deceptive than others. "Diamonique" used by the QVC shopping network, is an example of such shameless branding.

Others, such as Diamond Nexus Labs, Russian Brilliants, Carat.cc, Sona Diamond, Signity Diamonnique, Lannite, Fianit, Van Graff, Zironite, Amora, and many more are vying for a market share under the false pretense that their brand is different from others. There is no evidence that they are.