Leon Megé European-trained setters are masters of setting diamonds and gemstones using a technique called “pavé,” from the French for “pavement.” Pavé stones are held in place with “beads” - rounded, raised wedges of metal.

Old styles of pavé are so-called “illusion” types. They were designed to work with stones that are less than uniform in size and shape. In order to mask these inconsistencies, setters would engrave faux shiny surfaces on the metal of the setting so the diamonds would blend in. Old “fishtail” pavé used engraved external V-shaped grooves resembling a fishtail to achieve that goal.

The most easily recognizable type of pavé is called “Bright Cut.” In this method, stones are placed between two reflective surfaces confined by parallel walls. These surfaces are either smooth or granulated (millgrained).

Leon Megé was one of the first jewelers to bring the micro pavé technique to the US. The term micro pavé has lost its original meaning; it is currently used to describe pavé that is set with very small stones - less than 1 point (0.01 ct) each. The process of setting stones that are so small (less than 1.2 mm) in diameter must be done using a microscope, hence the adoption of the term “micro pavé” to simply mean “microscopic setting.”

Setting micro pavé is a meticulous process done by our highly skilled craftsmen. This level of precision is only possible by using high magnification and specialized tools. The end result of this tedious process is sparkling micro pavé jewelry that is certain to draw the eye of anyone who sees it. To learn about micro pavé in-depth, please follow this link.

Unlike earrings and pendants, rings are subjected to constant wear, sometimes extreme, because our hands are in perpetual use throughout the day. We often don’t realize how much duress a ring will sustain during its daily interaction with the environment.

Pavé stones held in place by the skin of their teeth were never meant to withstand the nonstop daily use of one’s finger. The smaller the stones, the smaller the beads will be. A typical micro pavé bead is only 0.015 mm in size!

The sheer beauty of micro pavé, originating as an exclusive element of couture jewelry meant to be only occasionally worn, eventually transitioned into the realm of bridal jewelry that is worn daily. Doorknobs, handrails, handles, and countless knocks on tabletops and counters all leave a mark every time they come in contact with a ring. Even softer surfaces such as wood or leather could bend or dent a ring when enough force is applied. Compounded daily, these minute impacts  cause the beads holding the pavé stones to weaken, bend or break, and can cause a diamond to fall out.

A missing pavé stone is not a disaster - it’s something that is easily remedied by any diamond setter specializing in micro pavé. In most cases, it’s not an indication of poor craftsmanship but rather a natural outcome of our choice to wear our jewelry every day. Micro pavé jewelry, just like all other bridal jewelry, is not eternal; it will be affected by the relentless advent of time, although the rate at which the micro pavé jewelry disintegrates depends almost entirely on one’s awareness of her immediate surroundings.

At Leon Megé, all round diamonds under 2.0 mm in diameter used in pavé are:

With rare exceptions, this is the standard grade for small stones, called melee, used in all our jewelry. Our price estimates are all based on this grade of stones.

The old as well as the new pavé techniques could be also used with modern, precisely calibrated diamonds produced by machines. These ideal-cut stones are full-cut 57-facet diamonds just like the much bigger stone you might have on your hand. The smallest diamonds we have ever worked with were 0.4 mm in diameter - smaller than a grain of the finest sand.

At Leon Megé, we use exclusively F/G -VS grade of ideal-cut diamonds with no fluorescence. 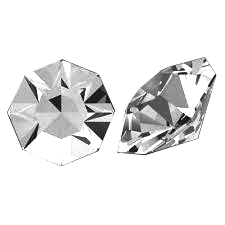 Single-cut diamonds have only 17 facets. In the old days, single cuts were low-grade, poorly shaped stones that were too small to cut by hand. These days, single-cut diamonds are premium stones and cost more. The reason for this is that in such small sizes, the facets of a full-cut stone are too small to produce a noticeable reflection, negatively affecting the stone’s fire and brilliance.

We are able to use single cut diamonds on customer request. There is a steep premium for using these stones, which makes them less practical. However, for projects involving antique-cut stones, the use of single-cut diamonds might be a good choice.

We discourage the use of lower color stones in pavé because that affects the appearance of the pavé. Lower color melee is usually produced with inconsistent proportions and less precision. Pavé resulting from the use of such stones will look rugged, uneven, misaligned and unbalanced.

At Leon Megé, we do not consider a center stone with lower color to be detrimental to its natural beauty, so we view matching the pavé color as pointless and unnecessary. We urge our customers to embrace their stone for its natural beauty and not try to blend it in with the pavé but rather think of it as a focal point framed by the finest diamond pavé.

Setting pavé is a time-consuming process that requires highly skilled labor. Since the cost of setting stones is much higher than the cost of the stones themselves, the use of less expensive, lower grade stones will not lead to an overall cost reduction. Similarly, colored stones are more difficult to set and are more prone to breakage, which will offset the savings in stone cost.

The latest scourge of the diamond industry is mixing synthetic diamonds with natural ones, done usually overseas by some unscrupulous suppliers. The industry currently estimates an average of  between 5% and as much as 30% of mixed parcels can be found in any given lot.

Machines capable of detecting and sorting huge quantities of minute stones are very expensive and scarce, so only a handful of producers are able to guarantee that all their melee is of natural origin. Our diamond suppliers are among the fortunate few who employ such a machine on a regular basis, and they state that fact in writing.

Nonetheless, as a consumer you should not be overly concerned about an occasional synthetic stone mixed in, since the stones are indistinguishable and their value differential is insignificant when compared to the cost of actually setting them.

Replacing a missing pavé stone is not a complicated task. On the other hand, repairing or re-tipping pavé beads is difficult. Sometimes the metal is worn out because of the age of the piece or due to friction between adjacent rings. Repairing such a ring might be impractical because of the costs involved. Re-setting a single micro pavé stone rarely costs more than $50. The best option is to get the ring to us; the repair is usually done the same day. If you prefer taking the ring to a local jeweler, make sure that the repair is done under a microscope.

In most cases, we give our customers the benefit of the doubt and (when asked nicely!) waive the charge the first time a stone is lost, unless the ring is showing signs of neglect or has been worn for more than a few months.

Most of the time, the stones in micro pavé become lost when the ring is bent or warped. When this occurs, the ring must be examined in order to determine whether any structural damage has occurred. Because of this, any potential repair costs can only be estimated after careful examination of the piece.